A Historic Remembrance & A Critical Call to Action

"I don't know how, any country, can plan for the future if it still envisions the possibility of the outbreak of nuclear war and the use of nuclear weapons."

END_OF_DOCUMENT_TOKEN_TO_BE_REPLACED 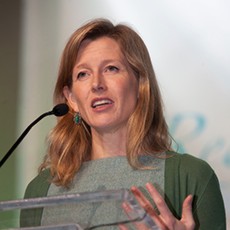 Karenna Gore, Director of the Center for Earth Ethics at Union Theological Seminary, has been appointed the first Parliament of the World’s Religions Ambassador on Climate Change by Parliament Chair Imam Malik Mujahid. Last year, the Parliament was an organizing partner and brought several presenters to Union's Religions For the Earth conference leading up to the September 2014 People's Climate March and climate meetings at the United Nations. At the 2015 Parliament, Ms. Gore attended as the emcee of the "Protecting the Only Earth We Have" plenary on Climate Change. In Paris, Gore will share "Embracing Our Common Future: An Interfaith Call to Action on Climate Change," the Parliament declaration presented at the 2015 Parliament of the World’s Religions and signed by leaders, scholars and activists across the interfaith and environmental movements.

As the United Nations’ COP 21 meetings continue into next week, Mujahid will work stateside with Rev. Chloe Breyer, Director of the Interfaith Center of New York, to discuss the interfaith movement for climate action with foreign and UN ambassadors.