Through elections held November 15 by the Board of Trustees of the Council for a Parliament of the World’s Religions, author, scholar, and founder of the M. K. Gandhi Institute for Non-violence, Dr. Arun Manilal Gandhi, is now beginning a 3-year term as a Parliament trustee. A grandson of Mohandas Gandhi, Arun brings an unassuming spirit and illuminating gumption to the Parliament in a partnership for a peaceful, just, and sustainable world. 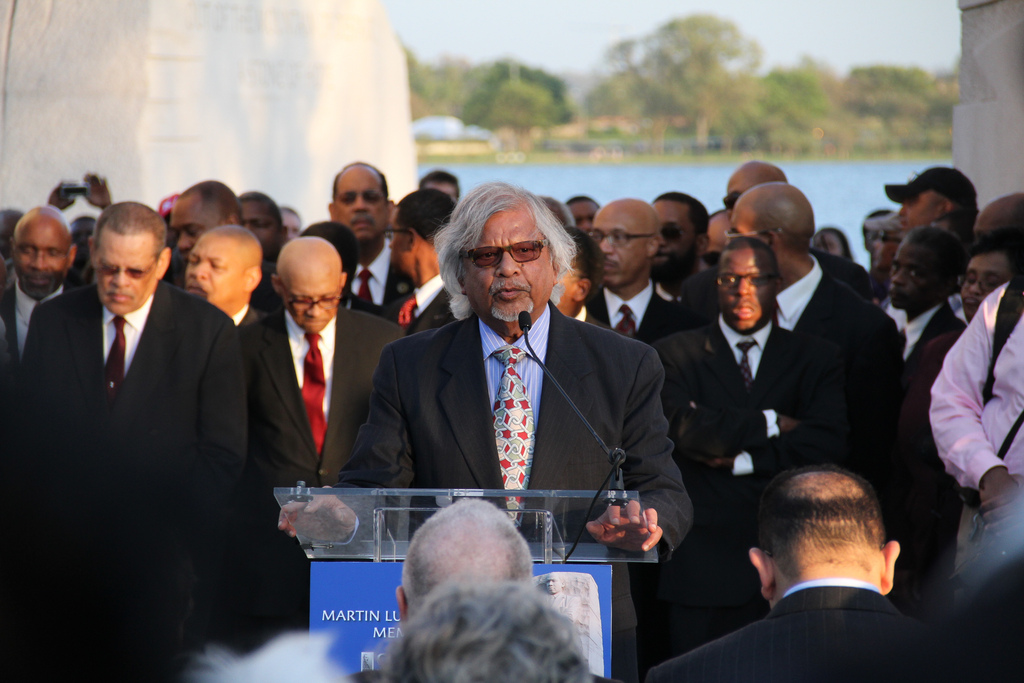 “If there is anything I have learned from Gandhi’s writings and the lessons he taught me as a young boy entering his teens is that humankind is inexorably dominated by a Culture of Violence,” Arun shares in On Enemies and Debates, a forthcoming Parliament of World Religion’s article. He continues, “over generations the roots of this culture have run deep dominating every aspect of human life — from parenting at home to governing nations. The salvation, according to Gandhi, lies in each of us “becoming the change we wish to see in the world.”

Parliament Board Chair Imam Abdul Malik Mujahid smiles on the news stating, “Gandhi was not known for his silence, and neither is his grandson, Dr. Arun Gandhi. He is doing his best to keep the flag of Satiagraha alive in America, as well as in India, where the voices of hate and anger sometimes seem to be drowning out the voices of truth and humanity. It is our honor to have Dr. Arun Gandhi on the board of the Parliament. We feel enriched with wisdom and connected to an important legacy of our time.”

Born 1934 in Durban South Africa, Arun was sent by his parents to India when he was 12 years old so that he could live with and learn from his grandfather, Mohandas Gandhi. It was then that young Gandhi learned the principles of non-violence that he continues to espouse until today.

Dr. Gandhi spent much of his adult life in India working as a journalist and promoting social and economic changes for the poor and the oppressed classes. Along with his wife, Sunanda, he rescued about 128 orphaned and abandoned children from the streets and placed them in loving homes around the world.

Together they began a Center for Social Change which transformed the lives of millions in villages in the western state of Maharashtra. In 1987, Arun came to the United States, and in 1991 started the M. K. Gandhi Institute for Nonviolence at the Christian Brothers University in Memphis, Tennessee, which was moved to the University of Rochester, New York in 2007.

Arun resigned from the Institute the following year to begin the Gandhi Worldwide Education Institute, with its mission to build basic education schools for the very poor children of the world. The first school will soon open in a depressed village in western India (www.gandhiforchildren.org).

Arun Gandhi has taken the message of nonviolence and peace-making to hundreds of thousands of high school and university youth around the United States and much of the Western world.

Publications by Arun Gandhi include The Legacy of Love; The Forgotten Woman: The Life of Kastur, wife of Gandhi, and several others.

Parliament Trustee, Robert Sellers, discusses film as a means of reflecting on human drama occurring across the globe, and as a springboard for conversation regarding shared values and the role of Religions therein...
[More]

On Sunday, September 21, Parliament Chair Imam Abdul Malik Mujahid (pictured below) will be speaking at the Religions for the Earth Multifaith Service at New York City's Cathedral Church of Saint John the Divine...
[More]

This Perilous Moment: A Statement from Religious Leaders and Communities on the Crisis of Racial Injustice and Inequity and the Current Protests

This Perilous Moment: A Statement from Religious Leaders and Communities on the Crisis of Racial Injustice and Inequity and the Current Protests We write together and in one voice, with urgency, as people of faith and...
[More]

WATCH NOW: The Relevance of Peace in the Post-Pandemic Era